Sunday's (3/19) Rally to Resist Voter Suppression, co-sponsored by like-minded good government and community groups, highlights the urgent need to overhaul our restrictive and outdated voting laws, which make it harder for New Yorkers to exercise their fundamental right to vote at every stage in the election process. 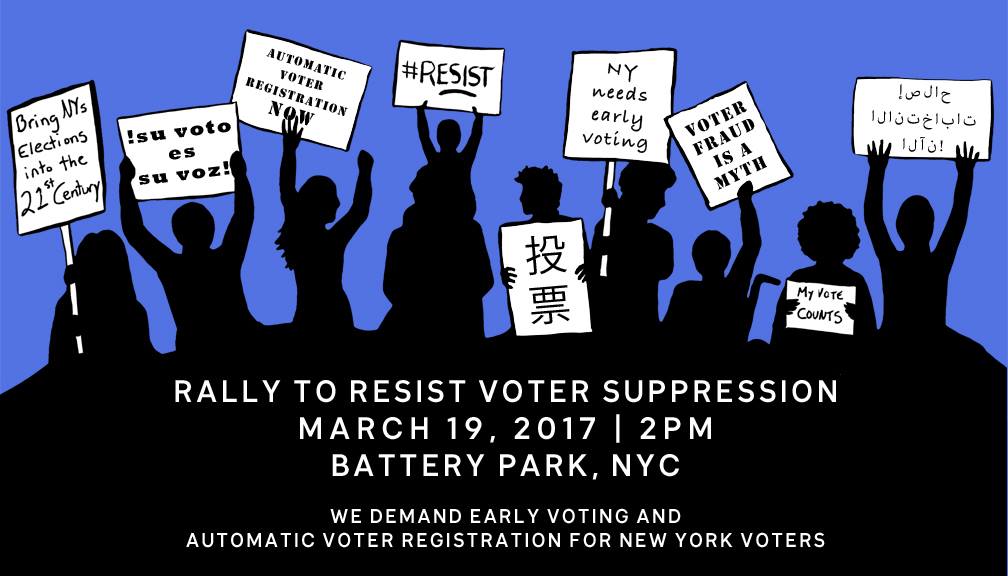 Albany lawmakers are currently negotiating the Fiscal Year 2017-28 New York State Budget which is due on April 1st. For the second year in a row, Governor Cuomo's Executive Budget proposal includes critical election law reform priorities like Early Voting, Automatic Voter Registration at the DMV, and Same-Day Voter Registration (one-stop voting). However, lawmakers have yet to include any corresponding state funding to enact these proposals, making it unlikely that State and County Boards of Elections would embrace or even be able to implement these much-needed overhauls.

After several years of failing to modernize our election laws, New York's poor election turnout and shameful voter registration and election day administration issues reached a fever pitch in 2016. On Monday, March 13th, New York's women leaders rallied in Albany to commemorate 100 years of women's suffrage and call for funding and enactment of these reforms in the budget. 135 women and organizations, including NYDLC leadership signed onto a letter requesting that state leaders include funding to make these proposals a 2017 reality.

Despite New York’s role as a bastion of diversity and progressivism, New York’s track record in the area of voting rights is disappointing. In the 2014 midterms, only 29% of New York’s voting-age citizens voted—the state’s lowest turnout in 40 years. As other states have embraced modernization, technology, and convenient pro-voter reforms to both voter registration and election administration, New York has been left in the dust. We must do better. We must fight against voter suppression and restrictive voting laws.

Please lend your voice to this widespread and long overdue effort to ensure that New Yorkers' fundamental voting rights are protected and respected. A great step toward that goal can be achieved in the next two weeks if our leadership in Albany enacts these reforms in the FY 2017-2018 budget. become law Albany must fund them in the budget. The event information can be found here: https://www.facebook.com/events/1244905385587799

The New York Democratic Lawyers Council (NYDLC) is a coalition of attorneys and voting rights advocates who share the common goal of protecting each citizen’s right to vote by ensuring that all who are eligible can register easily, vote conveniently and without intimidation, and that all votes are counted accurately by reliable voting systems. You can learn more about NYDLC here and support NYDLC with your generous contribution in any amount here.