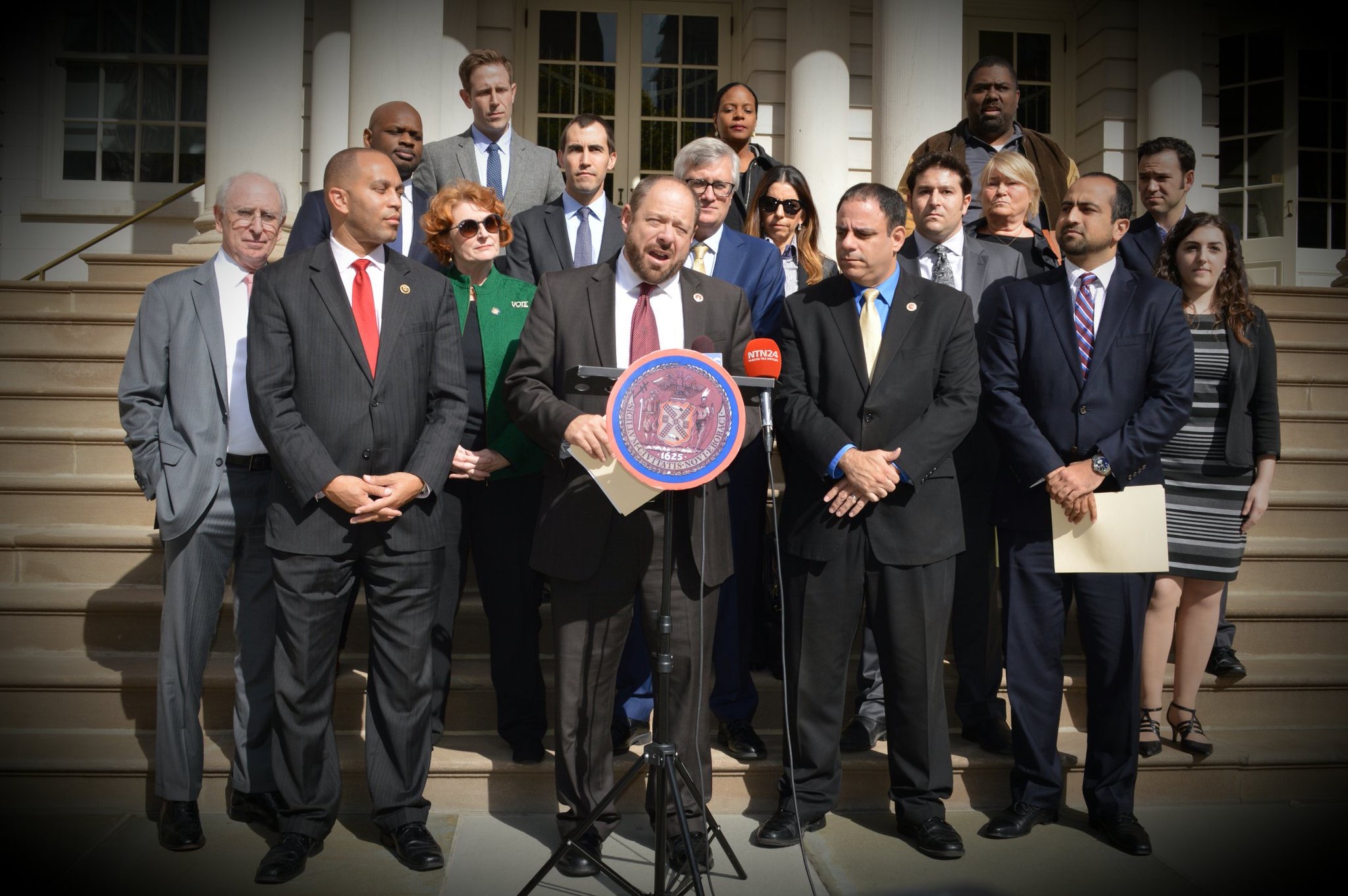 Today, the New York Democratic Lawyers Council (NYDLC) joined together with federal, state, and local elected officials to announce a mobilization effort to protect the vote in swing states, and in swing districts within New York State. In addition to organizing to protect the vote, they also condemned the inflammatory and unacceptable comments by Donald Trump encouraging his supporters to intimidate voters and refuse to accept the legitimate results of the November election.

“Despite popular Republican rhetoric, voter fraud isn’t a problem: It is voter suppression that threatens our democracy,” said Council Member Rory I. Lancman, Chairman of the Courts & Legal Services Committee. “Every American citizen who wants to vote deserves the right to cast their ballot free of intimidation and needless obstacles. It’s crucial to protect the vote, especially in places where it is most threatened, since black and Latino voters are disproportionately impacted by these laws. Together, we’re going to ensure that casting a ballot on Election Day is just as easy and exciting as it’s supposed to be.”

"The fundamental right of all eligible voters to participate in our democracy must be ensured,” said Jarret Berg, Executive Director of the New York Democratic Lawyers Council. “Those who care about election integrity should be alarmed that 20 states since 2010 have enacted laws that make it more difficult for certain groups of perfectly eligible Americans to vote. Voter protection is a great way for lawyers and others to help guarantee that elections are fair and our core civil rights are not infringed."

"The right to vote without obstruction is critical to the integrity of our democracy,” said Representative Hakeem Jeffries. “Yet, it is under siege throughout the country as a result of an intensifying voter suppression campaign.  Councilman Rory Lancman and the New York Democratic Lawyers Council are to be commended for their tremendous effort to protect the democratic process."

“All Americans deserve to exercise their right to vote without intimidation or voter suppression tactics,” said Council Member Costa Constantinides. “I have visited polling places in battleground states to advocates for voters’ rights and I’ve fought hard against practices that would disenfranchise eligible voters.  Especially during an election like this year’s, when deceptive election practices and voter intimidation may be an even bigger issue, it is important to ensure that everyone who is eligible can vote.  I am proud to continue to join the New York Democratic Lawyers Council in working for increased voter access.  Thank you to my colleague Council Member Rory Lancman for his leadership on this important voting rights issue.”

“Voter suppression tactics are happening in far too many places,” said Council Member Andrew Cohen. “The forces pushing these measures claim that they are necessary due to alleged rampant voting fraud.  Yet the fraud claims are virtually never supported by evidence.  Such unsupported claims are undermining confidence in our American electoral process.  We must step forward to challenge this, protecting the rights of voters in New York and key battleground states like Florida, North Carolina, Ohio and Pennsylvania. I applaud Council Member Lancman and the New York Democratic Lawyers Council for their efforts to wage this battle.”

“I commend Council Member Rory Lancman in their efforts to combat voter suppression,” said Assembly Member Latrice Walker. “All across the country there will be efforts to suppress the votes in this upcoming election and we must do everything to can to protect each and every vote, which is why I am joining with the New York Democratic Lawyers Council to announce a mobilization to protect the vote in key states.  We have fought too hard to let shadowy figures stop folks in our communities from lawfully casting a ballot.”

“Voting is the bedrock of our democracy,” said Council Member Dan Garodnick. “Yet during this campaign season, we’ve seen our system come under attack with talk of rigged elections. This rhetoric is dangerous and simply without merit.  I am proud to support the New York Democratic Lawyers Council, who in this most critical time will ensure the voting rights of all are protected.”

"Donald Trump has made outlandish claims about mysterious forces supposedly rigging the election, and he and his supporters have suggested that certain communities be targeted for voter intimidation,” said Assembly Member Brian Kavanagh. “Like much of what he says and does, Trump's latest effort to undermine democracy itself is a dangerous escalation of some bad trends we've seen developing for a while in right wing rhetoric and in laws and activities intended to suppress votes. I thank Councilmember Rory Lancman, and Jarret Berg and the Democratic Lawyers Council, for organizing people to protect the right of all Americans to cast their ballots freely and fairly at this critical time."

“The right to vote is the very foundation of democracy, yet recent events have shown that some seek to curtail this right in an attempt to usurp power” said Assembly Member David Weprin. “Voter suppression, voter intimidation, and other attempts to disenfranchise the voting public run antithetical to our shared democratic values and are means to seek elected office without the consent of the governed. As such, I call for an end to all voter suppression measures and support Council member Rory Lancman and the New York Democratic Lawyers Council in their mobilization effort to protect the vote this November.”

"We are very focused on deploying New York attorneys to the key battleground states of Pennsylvania and Florida,” said Jamie Ansorge, an attorney and volunteer organizer. “Our volunteers will be in the field monitoring poll sites, making sure voters understand their rights, and reporting any instances of intimidation, misinformation, or disenfranchisement. Together we will make sure that every legal vote is counted and that every american voice is heard in this critical election."